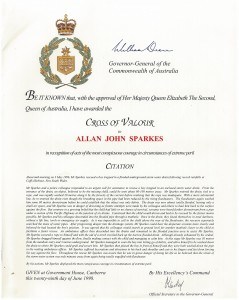 The following is an extract of the official citation that was presented to Allan at Government House, Canberra in 1998 by the Governor General of Australia, Sir William Deane AC, KBE, QC. The award was notified in Commonwealth Gazette No. S287 of 29 June 1998.

About mid-morning on 3 May 1996, Mr Sparkes rescued a boy trapped in a flooded underground storm water drain following record rainfalls at Coffs Harbour. Mr Sparkes and a police colleague responded to an urgent call for assistance to rescue a boy trapped in a flooded storm water drain. From the entrance of the drain, an object, believed to be the missing child, could be seen about 80-100 metres along. Tied to a rope, Mr Sparkes entered the drain and was rapidly washed 20 metres along the pipe by the ferocity of the current before realising the rope was inadequate. With a more substantial line he re-entered the drain even though breathing space in the pipe had reduced due to rising flood waters and his own bulk displacement. Flood water washed him some 80 metres downstream before he could establish that the object was only debris.

The drain was now almost totally engulfed in flood water leaving only a small air space and Mr Sparkes was in danger of drowning as frantic efforts were made by his colleague and others to haul him against the flow to the surface. Although believing the child had little or no chance of survival, screams were heard further downstream in a pipe under a section of the Pacific Highway at the junction of six drains. Believing that the child was drowning and had to be rescued by the fastest means possible, Mr Sparkes and his colleague entered the pipe in total darkness without a life line, torch or emergency air supply. As it was impossible to call the child above the roar of the flood wate, the rescuers separately searched the maze of water pipes. After progressing deeper into the drainage system Mr Sparkes could hear the desperate screams more clearly and believed he had located the boy’s position. It was agreed that his colleague would search at ground level for a manhole closer to the child to facilitate a faster rescue. An ambulance officer then descended into the drains and remained in the flooded junction area to assist Mr Sparkes. Mr Sparkes secured a rope to himself and with the aid of a torch crawled back up the flooded drain. Exhausted from his ordeal Mr Sparkes dragged himself against the flow, finally making contact with the child and managing to calm him. By this stage Mr Sparkes was 30 metres from the pipe opening and 3 metres underground. Mr Sparkes managed to coax the boy into letting go of debris, and allow himself to be washed down the drain to where Mr Sparkes could grab and secure him. Mr Sparkes then placed the boy in front of himself and they were both washed down the pipe to the waiting ambulance officer. Mr Sparkes suffered lacerations and abrasions to his back and shoulder and cuts to his fingers and feet from forcing his way against the flow. Throughout the rescue Mr Sparkes was aware that he was in grave danger of losing his life as he believed that the whole of the storm water system was only minutes away from again being totally engulfed with flood water.
By his actions, Mr Sparkes displayed the most conspicuous courage in circumstances of extreme peril.